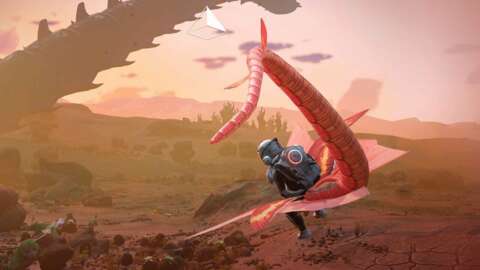 With its fifth anniversary on the way, No Man’s Sky is still building and improving on its impressive intergalactic world. Earlier in June Hello Games released the ambitious Prisms Update, which added furry creatures and flying pets for the first time. The latest update 3.53 is a smaller hotfix, mopping up some of the issues created by Prisms.

The biggest addition in the new patch is what Hello Games describes as “improved ship explosion effect during space combat.” The other major changes in the update are all fixes for issues in Prisms’ new content–such as bugs around how furry creatures are displayed.

Want us to remember this setting for all your devices?

Please use a html5 video capable browser to watch videos.

This video has an invalid file format.

Please enter your date of birth to view this video

By clicking ‘enter’, you agree to GameSpot’s

While the list of fixes in this patch is pretty concise, Hello Games has encouraged players to keep reporting new bug through Zendesk or console crash reporting so they can be fixed by the development team.

With No Man’s Sky turning five years old in August, it’s likely players can expect more surprises in the lead up to the anniversary date. The game recently hosted a surprise crossover with Mass Effect to mark the release of the Mass Effect Legendary Edition, where No Man’s Sky players could unlock the iconic Normandy SR1 ship for their fleet.

Watch live streams, videos, and more from GameSpot’s summer event.
Check it out

US Army Has Reportedly Stopped Streaming On Twitch Amid Controversies